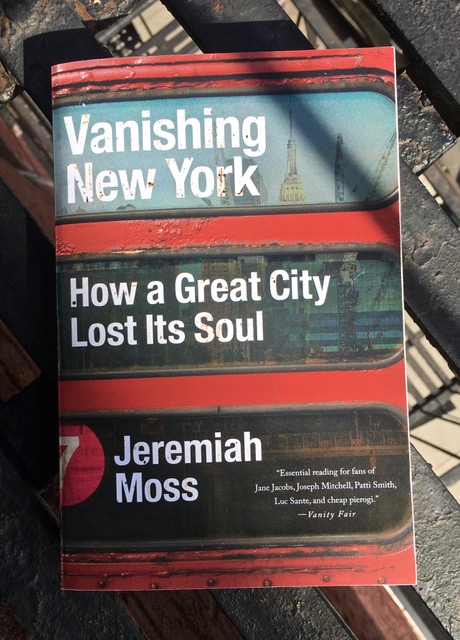 An unflinching chronicle of gentrification in the twenty-first century and a love letter to lost New York by the creator of the popular and incendiary blog Vanishing New York.

For generations, New York City has been a mecca for artists, writers, and other hopefuls longing to be part of its rich cultural exchange and unique social fabric. But today, modern gentrification is transforming the city from an exceptional, iconoclastic metropolis into a suburbanized luxury zone with a price tag only the one percent can afford.

A Jane Jacobs for the digital age, blogger and cultural commentator Jeremiah Moss (Griffin Hansbury) has emerged as one of the most outspoken and celebrated critics of this dramatic shift. In Vanishing New York, he reports on the city’s development in the twenty-first century, a period of “hyper-gentrification” that has resulted in the shocking transformation of beloved neighborhoods and the loss of treasured unofficial landmarks. In prose that the Village Voice has called a “mixture of snark, sorrow, poeticism, and lyric wit,” Moss leads us on a colorful guided tour of the most changed parts of town—from the Lower East Side and Chelsea to Harlem and Williamsburg—lovingly eulogizing iconic institutions as they’re replaced with soulless upscale boutiques, luxury condo towers, and suburban chains.

Propelled by Moss’ hard-hitting, cantankerous style, Vanishing New York is a staggering examination of contemporary “urban renewal” and its repercussions—not only for New Yorkers, but for all of America and the world.

“I haven’t read a more impassioned book in over a decade.” – Gary Shteyngart

“Moss, a cantankerous defender of the city he loves, chronicles its disconcerting metamorphosis from cosmopolitan melting pot to bland corporate lounge with passion and vigor; New York is lucky to have him on its side.” – Alexandra Schwartz, NewYorker.com

Number 3 on The Guardian‘s Top 10 Books About New York: “the cri de coeur.”

“This book is a must-read. Jeremiah Moss bears witness on our behalf, and puts it all into brilliant perspective.” – Andy Cohen, Watch What Happens Live with Andy Cohen

“Moss won me over almost immediately and has written a cri de cœur that is essential reading for anyone who loves this city.” – Michael J. Agovino, The Village Voice

“a remarkable atlas charting where New York has gone, and why.” – The New Republic

“Jeremiah Moss came to the party that is New York City just in time to see it turn into a wake. His book is lucid, eloquent, phenomenally detailed, and terribly sad. Future generations, assuming there are any, will read it in wonder and disbelief.” – Luc Sante

“This is a very good, angrily passionate, and ultimately saddening book…. a brilliantly written and well-informed account.” – Booklist, starred review

“Vanishing New York is an urban-activist polemic in the tradition of Jane Jacobs’s Death and Life of Great American Cities: Every page is charged with Moss’s deep love of New York. It is both a vital and unequivocally depressing read.” – Molly Fitzpatrick, Village Voice

“a loving and cranky tour that swerves through the destructive path of New York’s gentrification craze, clocking the knish shops, actual speakeasies, and real communities that have been erased by the wave of bubble cash that has coursed through the city… I love this book.” – John Freeman, LitHub

“a brawny book…a full-throated argument for New York City as a particular kind of place, and for a certain kind of life lived within it.” – Guernica

“a vigorous, righteously indignant book that would do Jane Jacobs proud.” – Kirkus

“Meticulously researched, thoroughly reported, at once memoir and a collection of life stories, a call to arms and a soul cry, Vanishing New York, at the end of the day, is a love letter to originality and the human spirit.  Grab a knish and settle in.” – Charles Bock

“Vanishing New York is an entertainment as much as it is a polemic. Angry – sure. Funny – you bet. And oh so astute.” – Shelf Awareness

“If New York City has eight million stories, than at least 4,650 are referenced in the book, which will serve as an invaluable resource to future scholars of the city.” – Curbed

“an unflinching indictment of the growth-above-all ethos… This book is a radicalizing guide.” – CityLab

“Moss tells an intriguing story that is an indictment of local leaders who ushered in a sterilized iteration of Gotham through public policies favoring the wealthy… a sad elegy to a city that is no longer recognizable.” – Associated Press

“If you care about the soul of New York City, you must read this book… a scream against the city’s ‘hypergentrification,’ a 420-page screed of lucid analysis and crystalline prose.” – The Indypendent

“A relevant lamentation of New York’s rebellious, nonconformist past and its path toward an inexpressive mélange of glass and steel big box stores and chain restaurants.”    – New York Journal of Books